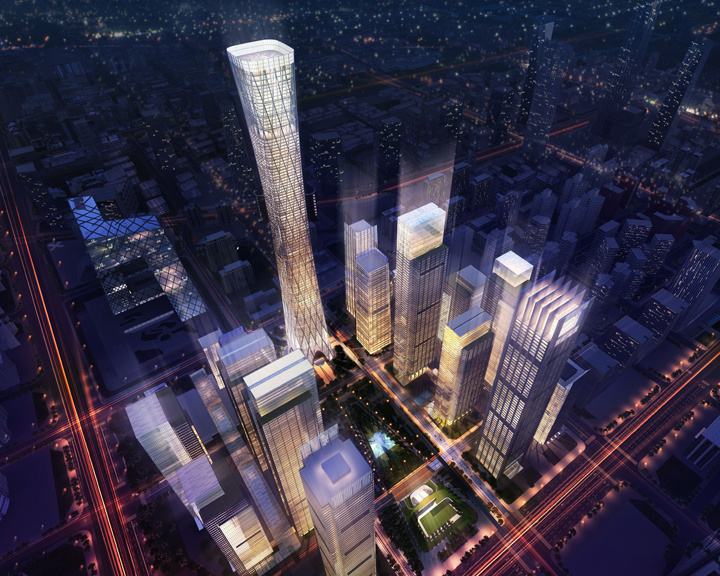 CITIC Tower is a supertall skyscraper in the final stages of construction located in the Central Business District of Beijing, capital of China. It is known as China Zun (Chinese: 中国尊; pinyin: Zhōngguó Zūn). The 108-storey, 528 m (1,732 ft) building will be the tallest in the city, surpassing that of the China World Trade Center Tower III by 190 metres. On August 18, 2016, CITIC Tower surpassed China World Trade Center Tower III in height, becoming Beijing's tallest building. The tower structurally topped out on July 9, 2017, and fully topped out on August 18, 2017, the completion date is set to be in 2018.

The nickname China Zun comes from the zun, an ancient Chinese wine vessel which inspired the building design, according to the developers, the CITIC Group. The groundbreaking ceremony of the building took place in Beijing on September 19, 2011 and the constructors expect to finish the project within five years. After completion, CITIC Tower will be Northern China's third tallest building after Goldin Finance 117 and Chow Tai Fook Binhai Center in Tianjin.

Farrells produced the tower's land bid concept design, with Kohn Pedersen Fox assuming the project and completing a 14-month-long concept design process after the client had won the bid.

China Zun Tower will be a mixed-use building, featuring 60 floors of office space, 20 floors of luxury apartments and 20 floors of hotel with 300 rooms,there will be a rooftop garden on the top floor at 524m high.